after getting some feedback on the brodlord all over the net i feelt that i had to give it some colours around the eyes. i knew that a lot of peppol would say somthing about  the eyes that it needs some colour around the face area and so on. But i some how feel that it would be to much colour in one place. but i took in the feedback went back in to the shop and gave it some love ones more.

the base was green than i just added some yellow on to it to bring it up and last i brusht on yellow to the eye to give that area some more life, the images will not show it that well but i you ever get the chans to look at it live you will se it.

and here is the monster, ejnoy ppl. 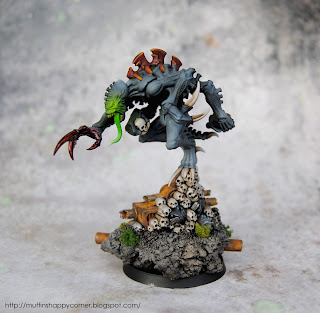 And last night i spent some hours painting on a bronzback in Photoshop to try and find the colours for my army, this are the things that i had in mind when i was working and knew.

And that was the things that i had in mind as i was working on the army and after two glasses of wine this is what i got. I feelt that i did not want to do the skin in a blue ton as a lot of ppl do it but in stead try and get it to look more dessert like. So lion was the animal that popt in to my mind they have sort of this golden brown ton to the fur and i love it. now to bend it some more to the darker browns and we are home. the only thing im not 100% sure on is the hair on the back.

do i make it orange or some other colour what do you thing? 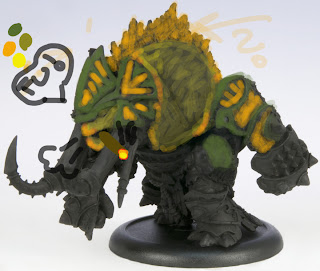 Well there you have it some uppdates and what im working on atm.

and it makes me happy to se that more ppl are following me, that gives me a lot of motivation to post and press more on the models that i work on. So a big thx to all of you for coming by.

PS: dont forget to Like my facebook page that helps me out a lot to >> here is a link<<
Posted by The Muffin Man at 02:31