Well here is my Deathleaper work log that i forgot to post. it has been a fun dude to paint and it hade it´s ups and downs i must say but it was not in the same lvl as the Red terror was to work on. 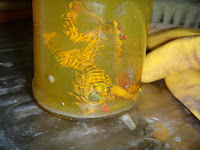 here is the big guy in a glass jar bing stript of its old colors
i also gave this guy a new wash jobb on the red insted of doing a brown wash i did a purpel havey wash jobb on him to make the red pop a bit more. after that i did a 50/50 mix of blood red and scarab red to get a sort of mide tone. that i put on the high lvls of the mini after that i gave it a magenta red wash and a devil mud wash the magenta was crazy and made the minin pop like hell so the brown took it down a bit.

first layer of scarab red on the guy, and my first good jobb whit green stuff. but i still have a lot to learn when it comes to green stuff.
the green was made in the same old way, first a goblin green then a green wash after that a layer of camo green was put on followd by a heavy green wash then i gave the lower part of the carapes my own green/brwon mix to make it look a bit dirty and then a new layer of green wash to bring it down a bit. the last part on the carapes was a dry brushing of scorpion green to make it pop a bit and give it some life.

the claws and hoofs was done whit a blechbone then a devil mud wash and last a blechbone dry brush give the high leves some white and you are done.

this is the end result of me Deathleaper im happy whit it, but not 100%
overall id give this guy a 6 out of 10 on the paint scale. it was not easy but not to heard either.
well that is all that i have for now

cya muffin
Posted by The Muffin Man at 08:14