Aloha ,well here is the big carnifex and here i go then.
will take it from the start, i fond the carnifex on a second hand site here in sweden and got it for 15€ and it was in a bad shape. the only pic that i have on him now is when i put it down in some Ajax that will strip the paint of the modell it took me two days befor i he was done. 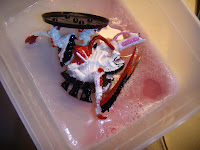 this is how he look when i got him. it was not a nice thing to se.
but after 2 days in this shit he will look a lot better. 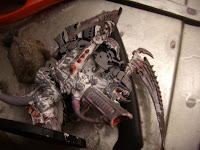 This is after the first day i got some more paint off of him on day two.
ones that was done i gave hime a undercote of white that i sprayed on to get it nice and tight. as you can se on the images there was still some paint left on the minin that was on there. but i manage to get most of the paint of of him was some paint left in the ribbcage and the in side of the legs. 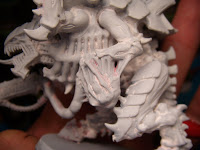 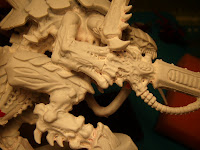 as you can se here on this images, there is still some color left in the deepest areas of the mini. so i have to liv whit some details lost.
and ones that was done i gave it a GW scab red foundation that i will work up. im want them to have a dark tone i took me some time to cover the minin but i got there in time ones that was done it was time for the green to come in to play on the armor. and i gave all the bone/hooves a GW bleached bone. then i was time for the ink the red was inkt black same as the oragne head. the green was a green havey ink and the bone/hoves hade a mud brown and some black to make it a bit dirty. 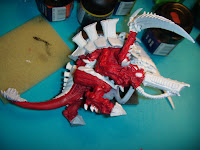 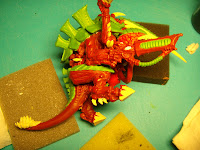 here you can se him whit the base colors, not a lot to look at but soon it will be eye candy.

then i gave a the red a 1part scab red and two parts boold red to make it pop a bit, the green was a layer of camo green and in the cracks there was a camo gren and some brown to tone it down. 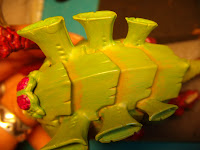 here you can se the craks that has a mix of green and brown.

and in the end i gave it a dry brush of scorpion green to make it pop the red got a blazing orange to make it pop and the hooves got a bit of whit on em and then a brown ink to em to tone it down a bit. 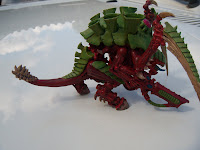 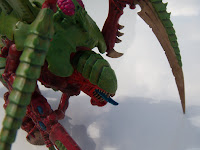 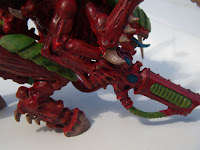 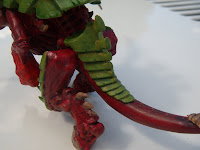 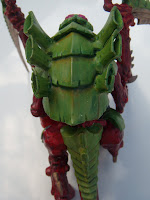 here you can se the end result of the minin, im happy whit what i got out of it. and i have lear a lot of new things ^^ i thank you for taking the time look at this post and hoppe that you have enjoyed it as much as i have.

muffin
Posted by The Muffin Man at 10:32