so i was up trying a new color combo for my tyranids, this time it was a blue and white plates. not to bad att all. but i still like the red ones a bit more. so im going to make the body this darker red and make the plates white. that will make em pop a lot. but still dont know if it will work, as them colors will pop a lot in the eye a dark red and then a white that has some gray tones. any how im still just trying some color combos and just geting some more training in my panting.
one thig that i se now, and is not working at all. Is the undercoat is black now, and painting a white on that is just a pain in the ass. so i have to make a white so that the dark red im work whit now will stick to the modell better. as it is now i have to paint it two times be for a i have a new look to it.

and now for some pics 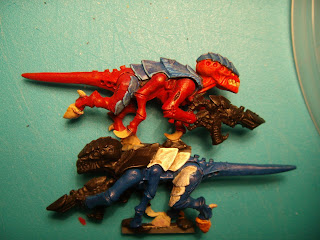 ok, so here we have the blue and white combo that i did. i still like the blue and white but there is a dude that has this to his army and i feel that id like to have my own color combo to my army. and that is also why i like the red one, and i am also going for a kraken army and them tyranids are in the red tones. so i will keep em in that spiret for now, the moste inportan thig for me now is to find nice colors. And also to find a why that is easy and fast to paint the modells. but still keep a high quality on them 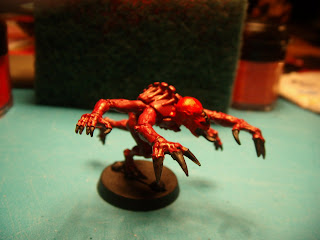 so i got the first set of paint on the dude, now to get the rest in there as well. will try and make it to the weekend as i have a lot to do now in school. so i have to spend all day tomoro in my books.


well that is all for now ppl,

cya muffin
Posted by The Muffin Man at 11:34