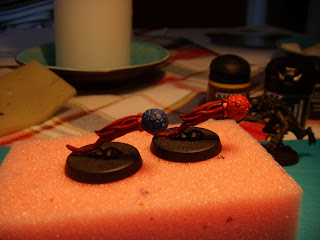 I know it´s been a wihle but hade some other stuff to do. any whos this is what i have been up to now. trying to find some nice colors for my buggs going for a kraken color set or reds and oranges but some blues to to give it some zazz. tho I still dont know what color to make the head on the spore mines orange or blue ??? need to ask ppl what thy like more cuz i can´t make up my mind on this one. I like the two of them, and i have been trying out some techniques as well. they did not turn out so good. the tyranid was a white whit a blue wash to it, but the end result looks so bad i begin to cry when i sa it. the other is the space marin one side is a try to glaze it yellow and the other one is a yellow that got some orange over it. the aime was to make it a imperial fist. so far its a fist up the butt =( 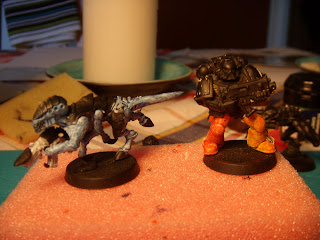 And last we have a skaven that i did 98, fond it when i was home at my folks place. was fun to se the old stuff i did. have a carni as well that i will post up later here on the blogg. this was a dude i hade in a competition and come 3 or 2end can´t remember. it took me a week to paint this bad boy so i was uber proud when i was done. still think is good for a dude that was 15. 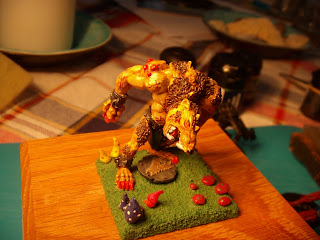 well that is all for now, will post more stuff soon.

muffin
Posted by The Muffin Man at 04:04