So my new prodjekt now is to paint up a team of MERCS/CCC elit team, so far so good. After i got all my GS work done i gave them some paint for my primer i did a mix of rotten flesh, khaki brown and some bad moon yellow. im going for a brown shadow look on them that is why i have the brown in there, after that was on i gave them a Devlin mud wash to get the deep shadows out. after that i put in some more yellow and white to the mix and took all the colours up a bit.

when that was done i did the priming of the base in brown still don't know where id like to take the base. Think i will try some sort of urban/dirt mix stile i think. Will play more whit that later for now i don´t want the base yellow. I have a heard time to se the tones on the model then as i got yellow all over the place, don´t know if that made any sense but that is how i work hehe. 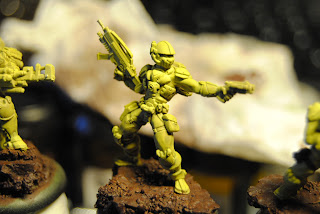 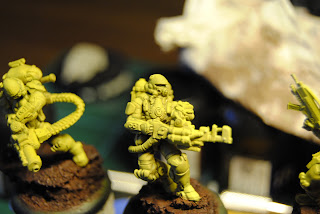 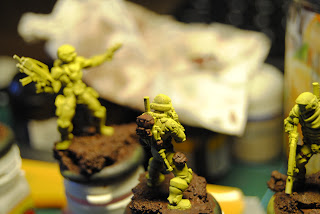 Don´t know if you can se it but if you look at them for a bit you will se the brown shadows there in the bottom of them. now I will prime all the black parts for them after that is done you will se a lot better where they are going. I have a good pic in my mind of how id like to have them and this is the first WIP so it is a long way to go.