so after a long day bing hung over i got my self to the computer to typ this log down.
this was a fun modell to paint and it will be fun to paint one more, but i have that on ice for now.
when working on this guy i did some new things, first was to wash the green whit a brown and then put a green wash over it this to make the color pop but in a soft way. and i also put some extra brown wash in the craks of the carapues to make them look extra dirty. the red was painted in this way scarab red then a purpel wash over it and then i gave it a highlight of scarab red/blood red 1:1 mix and some water in that to make it nice and thin. when that was done i gave it a orange wash over the highlights to bring it down a bit and then a soft drybrushing of blazing orange. 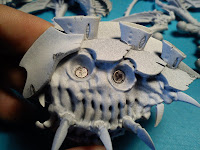 i magnetist him and a total of 13magnets are in side of this bad boy. was the first time i did this sort of thing and it will not be the last. i also gave it a white baseing as i like to paint on white and not a black baseing. sure u can get in fast and easy shadows and stuff like that but. But the main reson that i paint on white is cuz i dont want the red to turn out to dark. 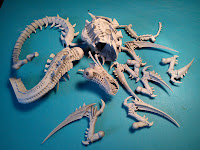 well when the white was on there i began to paint the red on to the guy. i dont know why i start whit the red but it´s just the thing i do haha. then came the green and after some time that was done. that is the boring part to do paint flats are not fun, but if u skip it or rush it you will se it in the end result. and im not the typ of person to skip a step, better to take your time and make it right.

i gave the adrenalin glands a new color as well, the fex has a purpel. but it took a lot of focus from the modell so this time i did it in a color that blends in to the red/green and is not that big of a eye poper. so i gave it some of my own mix and put in some extra yellow in there and gave it a havey yellow wash as well to make it look all slime and goo look. im sorta happy whit the result but i think that i will try and put in some red, to make it look more poison.

like i said in the start of the post, this was a awsome modell to paint and it will be fun to paint one more. the modell it self was not so hard to paint so i give it 3 out of 5. but on the other hand i did not do any hard core blening as i still cant bland colors in a good way, but im working on that.

well that is all that i have for now, here are some end result pics hope you enjoy the post.