So i have been working a bit on the colors id like to have on myy Tyranids. and what i came up whit is that i like the colots on the blue crab. i was first going for some sort of insekt in the rainforest but then agin, if you are at war what is the point if the enamy se you be you can make a move?? 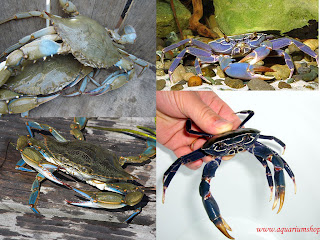 So it hit me that i need to blend them in but still have some funk in them, no point in pating them just black. So the blue in the crab i like. and the green,gray tones on the top of it are just awsome. just what im after. i think that will try and work some more on the colors later on. but for now im happy. and i like that it has a bit of red on the claws as well for that extra, and the other crab in the pic is some tropical thing any how the point is that i like the white out lines it has around it´s face makes it pop a bit. so i will try and work that in as well. and the blue on that one is a bit darker to still dont know what blue to go on?

but the blue crab is a given for now.

thats all for now, later